Honda is the Highest Ranking Brand for the second consecutive year!

The Honda and Acura brands achieved the best scores in their histories. The Honda brand held onto its position as the highest performing mass-market brand by improving on its industry-leading score of a year ago, and for the fourth straight year overall. The Acura brand also improved and ranks sixth among all nameplates. The all-new 2012 Honda CR-V earned the highest score in the compact crossover SUV category, while five other Honda models finished second in their respective segments. In fact, the Accord (midsize car), the Odyssey (minivan), the Crosstour (midsize crossover SUV), the Ridgeline (midsize pickup) and the Fit (sub-compact car) finished just behind the segment leader. Additionally, the Pilot ranked third, just behind the Crosstour, in the midsize crossover SUV segment. All of these models except the Fit are manufactured in North America using domestic and globally sourced parts. The IQS ranks vehicles based on a measure of reported problems per 100 vehicles (or PP100).

"For the second consecutive year our performance demonstrates our consistent commitment to deliver the highest quality for our customers," said Tetsuo Iwamura, president & CEO of American Honda Motor Co., Inc. "Thanks to the efforts of Honda associates in R&D, in manufacturing and in sales, we were able to continue to improve quality performance in this key industry ranking." In the manufacturing area, 2012 marks the second consecutive year that a Honda plant has earned the top assembly line award globally. The 2012 J.D. Power and Associates study recognized the Suzuka, Japan plant, Line 3, as the only global Platinum Award, for production of the Honda Fit and CR-Z. The Marysville, Ohio plant, which celebrates its 30th anniversary this fall, earned a Silver Plant Quality Award for production of the Honda Accord and Acura TL and RDX. In 2011, Honda Manufacturing of Indiana, LLC earned the IQS Platinum Award. The J.D. Power and Associates' Initial Quality Study serves as an important tool for consumers in evaluating the quality and design of new vehicles. Since 1987, J.D. Power and Associates has been surveying owners to measure the initial quality of new vehicles.

http://www.hondacarsrockhill.com/
Posted by Honda Cars of Rock Hill at 3:50 PM 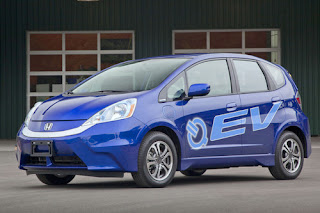 The 2013 Honda Fit EV, has received a combined adjusted Environmental Protection Agency (EPA) mile-per-gallon-equivalency rating of 118 MPGe, and an unprecedented low consumption rating of just 29 kilowatt hours (kWh) per 100 miles. With an EPA rated annual fuel cost of only $500, the fun-to-drive 2013 Honda Fit EV can help consumers get more miles for each charging dollar. Full EPA MPGe ratings1 for the Fit EV are 132/105/118 city/highway/combined*.

With such an efficient drivetrain, the Fit EV’s 20-kWh lithium-ion (Li-ion) battery provides the capacity to earn an EPA combined city/highway estimated driving range rating of 82-miles, allowing the Fit EV to surpass the EPA efficiency and range ratings of the Ford Focus Electric (105 MPGe, 76-mile range), Nissan Leaf (99 MPGe, 73-mile range), and Mitsubishi i-MiEV (112 MPGe, 62-mile range). The Fit EV’s exceptionally efficient design – encompassing everything from savvy powertrain design, weight-conscious engineering and effective aerodynamics – makes the most of the Fit EV’s smaller battery. Additionally, the Fit EV battery can be recharged in less than 3 hours from a low charge indicator illumination point when connected to a 240-volt circuit.


“Just as important as the industry-leading fuel-efficiency and fast recharging time, as a Honda, the 2013 Fit EV will be an absolute kick to drive,” said Steve Center, vice president of the American Honda Environmental Business Development Office.


The Fit EV’s 92 kilowatt (123 horsepower) coaxial electric motor generates 188 ft-lb of torque, and is teamed to a chassis with a fully-independent suspension and a driver-selectable 3-mode electric drive system adapted from the CR-Z Sport Hybrid.


Honda debuted the 2013 Fit EV at the 2011 Los Angeles Auto Show and announced plans to begin leasing the battery-electric commuter vehicle to customers in select California and Oregon markets during the summer of 2012, followed by an East Coast rollout in 2013.

*132/105/118 city/highway/combined miles per gallon of gasoline-equivalent (MPGe) rating; 82 mile combined (city/highway) driving range rating (adjusted). Ratings determined by EPA. Your MPGe and range will vary depending on driving conditions, how you drive and maintain your vehicle, battery age/condition, and other factors. For additional information about EPA ratings, visit http://www.fueleconomy.gov/feg/label/learn-more-electric-label.shtml.