Honda has a long history of leadership in the development and application of advanced technologies and designs to enhance the safety of all road users, including automobile occupants, motorcycle riders, and pedestrians. The company operates two of the world's most sophisticated crash test facilities and is responsible for numerous pioneering efforts in the areas of airbag technology, collision compatibility and pedestrian safety. This commitment to safety is rooted in Honda's goal to be a company that society wants to exist, and it complements the company's leadership in reducing vehicle emissions, improving fuel efficiency and advancing alternatives to gasoline.


Honda takes a comprehensive approach to vehicle safety, seeking to provide enhanced levels of occupant protection and help with crash avoidance in all Honda and Acura passenger vehicle designs, while also making an active commitment to enhance safety for the occupants of other vehicles as well as pedestrians.


•The company's 'Safety for Everyone' initiative, undertaken in October 2003, helped lead the industry to the increased application of standard safety features. In 2006, the company fulfilled the core part of the initiative, to equip virtually all Honda and Acura vehicles with a core suite of advanced safety features as standard equipment, regardless of vehicle size or price.


•Today, the company is looking to further advance its commitment to safety with the introduction and broad application of new safety technologies and driver assistive features for improved visibility:


•Forward Collision Warning and Lane Departure Warning technologies will be applied to virtually all Honda and Acura models within the next several years, beginning with the all-new 2013 Accord, launching in the fall of 2012.


•Side curtain airbags with a wider deployment profile to help mitigate possible ejection will be introduced in the 2013 Accord and applied to additional models within several years.


Honda has been a consistent leader in achieving top-level safety ratings for its vehicles in both government and private industry crash test ratings.


•The 2011 Accord sedan was the first vehicle to earn a 5-star Overall Vehicle Score and a 5-star rating for all three underlying categories (frontal, side crash and rollover) under the NHTSA's safety ratings system that was modified starting with the 2011 model year.


•The 2011 Odyssey is the first and still the only minivan to achieve a 5-star Overall Vehicle Score from the NHTSA and a "Top Safety Pick" rating from the IIHS.


Honda has played a leading role in addressing the issue of compatibility in frontal collisions between vehicles of different size, mass and ride height.


•In 2005, Honda introduced the Advanced Compatibility Engineering™ (ACE™) body structure on the Acura RL to enhance occupant protection in a frontal collision between vehicles of different sizes and ride heights.


•19 of the 21 Honda and Acura vehicles sold today – representing more than 95% of American Honda's new-vehicle sales in the U.S. – incorporate the ACE body structure.


As part of its commitment to improving safety for all road users, Honda has also led the U.S. automotive industry in the application of features designed to reduce injuries to pedestrians in a collision, such as collapsible hood hinges and breakaway windshield wiper pivots, with a focus on reducing severe head injuries, which account for 60 percent of pedestrian fatalities.


•In advancing its designs, Honda first sought to better understand the dynamics of pedestrian collisions with the development of POLAR II, widely recognized at the time of introduction as the world's most advanced pedestrian crash test dummy. Tests conducted with POLAR II led to the development of the above noted features.


•In September 2008, Honda introduced its third-generation POLAR III test dummy with the enhanced ability to measure crash forces in the lower back and upper leg areas.


•More than 9 million Honda and Acura vehicles purchased by U.S. customers, including all model year 2008 and newer vehicles (except the S2000 – discontinued for MY2010) feature pedestrian injury mitigation features and designs.


Honda operates two of the world's most sophisticated crash test laboratories for development of improved safety designs and technologies.


•The company's Tochigi, Japan, facility was the world's first indoor, multi-directional car-to-car crash testing facility. The Tochigi facility has played a critical role in the development of enhanced designs for occupant and pedestrian safety as well as vehicle-to-vehicle compatibility.


•Honda R&D America's Raymond, Ohio, development center performs advanced testing on all U.S.- developed models. The facility features the world's first crash test sled with the ability to simulate the forward pitching motion of an automobile in a frontal collision, allowing for more accurate simulations of vehicle crash dynamics. The Ohio facility also features one of the world's highest resolution impact barriers – a 100-ton moveable crash test block with reconfigurable sides and 450 load cells – enabling precise measurement of the distribution of impact load forces on a vehicle to aid in the development of more advanced vehicle designs.


Honda has long been a leader in introducing the industry's most advanced air bag systems, including:


•The first front passenger airbag to deploy vertically from the instrument panel, rather than directly at the passenger.


•Occupants in the outboard seating positions of every row of every new Honda and Acura vehicle are protected by side curtain airbags.


Honda has been a leader in developing next generation safety technologies, including:


•A Collision Mitigation Braking System™ (CMBS™) – introduced on the 2006 Acura RL – as well as continuing research toward future collision avoidance systems and designs for automobiles and motorcycles.

“This is the vehicle [CR-V] that virtually defines its class….”
Automobile Magazine

According to a Consumers’ Favorites poll conducted by Edmunds.com, the Honda CR-V is consumers’ #1 choice in Compact Crossovers.

In a comparison of compact SUVs, including the 2012 CR-V and the 2013 Ford Escape (May 2012), Automobile Magazine noted about the 2012 CR-V: “This is the vehicle that virtually defines its class….” It’s not surprising, therefore, that the new 2013 Ford Escape is so similar to the CR-V in many respects, including its overall length and width, being offered exclusively with 4-cylinder engines, and offering a choice of front-wheel-drive or all-wheel-drive configurations.


Beyond the similarities, however, CR-V offers customers many advantages over the 2013 Escape, including greater utility, greater driver and passenger comfort, the assurance of top safety ratings and unique safety features, a reputation for reliability, and greater overall value.


The 2012 CR-V earned a 5 Star Overall Vehicle Score from the National Highway Traffic Safety Administration (NHTSA). It earned five stars in the frontal crash and side crash categories, and four stars in the rollover category.


The CR-V is a 2012 Insurance Institute for Highway Safety (IIHS) TOP SAFETY PICK with “Good” performance in front, side, rollover, and rear tests.


The 2013 Ford Escape has not yet been tested by NHTSA or IIHS.


Honda is the highest ranked non-premium nameplate in the 2012 J.D. Power and Associates Initial Quality StudySM (IQS) and the 2012 CR-V earned the best score in the compact crossover SUV category. That means the 2012 CR-V was more trouble-free than competitive compact SUVs during the initial ownership period.


“…there are enormous storage bins everywhere… the rear seats fold flat in the most breathtakingly simple mechanical origami… no motors are involved, just a gentle tug on one of the two handles mounted cleverly (and accessibly) by the rear hatch. In one motion, the seat bottoms flip up and forward, then the seatbacks flop down. The CR-V might be the same size as these other two vehicles [2013 Ford Escape and 2013 Mazda CX-5], but no one told its interior – cargo room dwarfs the other two vehicles with the seats up or down. And the liftover height is impossibly low.” Automobile Magazine (May 2012)


“Not only does the Ford [Escape] trail its other rivals in shoulder room front and rear, but the sloped center stack intrudes noticeably into the driver’s footwell. As a result, [the driver’s] right leg will remain in constant contact with hard plastic, fighting to get her leg far enough to the right to reach the offset and partially obscured gas pedal.” Automobile Magazine (May 2012).

Come by today and Test Drive a New 2012 CRV!! You won't be disappointed. www.hondacarsrockhill.com
Posted by Honda Cars of Rock Hill at 1:27 PM

Ventura County, Calif., residents, Matt and Becky Walton, took delivery of their Honda Fit EV at the Woodland Hills Honda dealership located north of Los Angeles. The couple was the very first registrant to sign up to lease the Fit EV at www.FitEV.Honda.com and plan to use their vehicle as a daily commuter car. Matt and Becky Walton have a long history of owning Honda vehicles, beginning with a Honda N600 sedan and a Honda Z600 coupe in the 1970s and now a Honda Odyssey which will be used as a secondary car.


"It's truly an honor to take delivery of the first Honda Fit EV and participate in the advancement of all-electric vehicles in the real world," said Mr. Walton. "The Honda Fit EV is not only a sustainable and energy efficient transportation option with the highest fuel-efficiency rating of any EV, but it has the added bonus of being fun-to-drive and can fully recharge from empty in less than three hours."


The Fit EV will be available for lease-only in key markets starting in California and Oregon, after which availability will expand to East Coast markets in early 2013.
Customers interested in leasing or learning more about the Fit EV are encouraged to sign up at http://www.fitev.honda.com/ 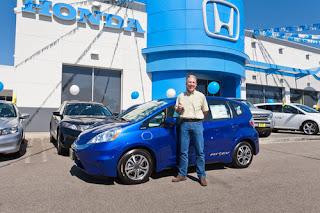 *132/105/118 city/highway/combined miles per gallon of gasoline-equivalent (MPGe) rating; 82 mile combined (city/highway) driving range rating (adjusted). Ratings determined by U.S. EPA. Your MPGe and range will vary depending on driving conditions, how you drive and maintain your vehicle, battery age/condition, and other factors. For additional information about EPA ratings, visit http://www.fueleconomy.gov/feg/label/learn-more-electric-label.shtml.
Posted by Honda Cars of Rock Hill at 3:57 PM