Drive Sensibly
Aggressive driving (speeding, rapid acceleration and braking) wastes gas. It can lower your gas mileage by 33 percent at highway speeds and by 5 percent around town. Sensible driving is also safer for you and others, so you may save more than gas money.
Fuel Economy Benefit:
5-33%
Equivalent Gasoline Savings:
$0.16-$1.02/gallon

Observe the Speed Limit
While each vehicle reaches its optimal fuel economy at a different speed (or range of speeds), gas mileage usually decreases rapidly at speeds above 60 mph.
As a rule of thumb, you can assume that each 5 mph you drive over 60 mph is like paying an additional $0.20 per gallon for gas.
Observing the speed limit is also safer.
Fuel Economy Benefit:
7-23%
Equivalent Gasoline Savings:
$0.22-$0.71/gallon

Remove Excess Weight
Avoid keeping unnecessary items in your vehicle, especially heavy ones. An extra 100 pounds in your vehicle could reduce your MPG by up to 2%. The reduction is based on the percentage of extra weight relative to the vehicle's weight and affects smaller vehicles more than larger ones.
Fuel Economy Benefit:
1-2%/100 lbs
Equivalent Gasoline Savings:
$0.03-$0.06/gallon

Use Cruise Control
Using cruise control on the highway helps you maintain a constant speed and, in most cases, will save gas.

Use Overdrive Gears
When you use overdrive gearing, your car's engine speed goes down. This saves gas and reduces engine wear.

Choose a Fuel Efficient Vehicle
Honda is the most fuel efficient automobile company in the US. Come by Honda Cars of Rock Hill and see our 2008 line up of fuel efficient, award winning vehicles. We are sure you will find one to fit your lifestyle!

Note: Cost savings are based on an assumed fuel price of $3.10/gallon.
Posted by Honda Cars of Rock Hill at 1:37 PM

Honda In the Press - Charlotte Honda

The Associated Press (AP) has reported that Honda topped the 2008 survey of vehicle reliability conducted by a leading consumer publication. The ratings are based on surveys of approximately one million online and print subscribers to the publication. While Toyota is still among the industry leaders, the AP noted that Toyota's scores have fallen. (Toyota placed third in the ratings behind Honda and Subaru.)

USN&WR: Five Hondas Ranked "Best Car for You"
The October 22, 2007 issue of U.S. News & World Report featured a special report, "Finding the Best Car for You." Using a numerical score (1-10) in 23 categories, the editors tallied points based on several factors and input those points into a database. Some of the areas the magazine analyzed included reviews from more than 100 news sources, as well as government data such as crash-test rankings and fuel efficiency. The goal was to take the subjectivity out of the review process. When the scoring was done, Honda vehicles ranked best in four "Affordable Car" segments:

ALG: Honda Wins Industry Brand Residual Value Award; Accord and Odyssey Are Tops in Their Segments Automotive Lease Guide (ALG) announced its annual Residual Value Awards in October. The awards include the vehicles in each segment that ALG predicts will retain the highest percentage of their original price after a conventional three-year lease. Honda received the Industry Brand Residual Value Award for the fifth consecutive year. Honda also received individual segment awards for Accord in the midsize car category and Odyssey in the minivan category. This was the seventh consecutive win for Odyssey.
Posted by Honda Cars of Rock Hill at 2:02 PM

All 2008 Honda models have TPMS

Tire pressure should still be checked manually once a month.

In the November 2007 issue, the editors of Car and Driver compare the Honda Odyssey EX-L with the Nissan Quest SL, Toyota Sienna LE, Hyundai Entourage Limited, and Dodge Grand Caravan SXT. When the comparing was done, Odyssey was solidly in First Place! Here is what the editors had to say about Odyssey and each of the competitors:

Fifth Place: 2007 Hyundai Entourage Limited
Pros:Second least expensive model as tested. "On the road, the powertrain impresses." HVAC and audio controls are "a short eye flick off the road." Third-row split seats are folded down and removed easily. Cons:"Outer fantasyland" front styling. "Toe space" in second row is "limited." Seat cushions are "too low to please adults." Ride quality is "unpleasant" on rougher roads. Removing second row seats is a "pig wrestle." "Narrow passage" to get into third-row seats.

Third Place: 2008 Dodge Grand Caravan SXT
Pros:"Inside, the Dodge has carved in so many nooks, crannies, cup holders, and juice-box niches that the soccer team will have to find something else to squabble over." "The Stow 'n Go seating … is back and easier than ever to operate." Second most horsepower. Second best 0-60 time (8.0 seconds). Tied for first 30-50 mph time (4.0 seconds). "Very little road noise." "The new 4.0-liter SOHC V-6 is a strong performer…" Chrysler's long experience satisfying minivan customers really shows in the cleverness of the interior features. Wide variety of storage compartments. Cons:"…it's isolated in that indifferent way that keeps the driver from feeling in charge." Longest braking distance 70-0 mph (203 ft). "If we have a reservation about Stow 'n Go, it comes down the rickety feeling of the mechanism." Optional console between front seats is "wobbly." Interior has a "cheap motel look about it … with plastic gestures everywhere…" Cloth upholstery looks "plebeian."

First Place: 2007 Honda Odyssey EX-L
Pros:
"This Honda has all the competitors covered when it comes to driver confidence. It feels purposeful, motivated, even athletic in ways the others do not." Driving position is "one of the best in the business." "The driver's seat is easily the most comfortable of the group." "The Odyssey is the only eight-passenger hauler of the group…" Comfortable second- and third-row seats. "Excellent foot space under the rows ahead." Tied for best fuel economy (17/24 mpg). Third row "stows easily." Cons:"The suspension motions are stiffer than the others, and the interior is quite loud, with notable wind noise and plenty of roar and thump…" Narrow opening to third-row seats.

Conclusion"Minivans are the sum of lots of little pluses and minuses, but the Odyssey's intuitive, confident stride over the road has once again won us over."
Posted by Honda Cars of Rock Hill at 8:26 AM

The Honda Ridgeline is different from traditional full-size pickups; it uses both a one-piece unibody and a steel ladder frame, welded together; cab and bed are built as one piece, with separate subframes for the engine, front suspension and rear suspension. Honda offers the Ridgeline in one body style and four trim levels: RT, RTX, RTS and RTL. The new RTX trim level joins the lineup featuring a standard trailer hitch, alloy wheels, accessory grill and body-color painted door handles.

The Ridgeline is powered by a 3.5-liter V6 engine that produces 247 horsepower and 245 pound-feet of torque. Standard transmission is a five-speed automatic with a transmission cooler. An all-wheel-drive system (dubbed VTM-4 for Variable Torque Management four-wheel drive) is also standard. Honda's first pickup truck is rated for a half-ton bed capacity and 5,000-pound towing capacity. 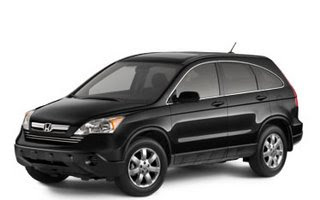 You asked for it and Honda heard you. The all NEW 2008 Honda CRV EXL-leather models will now have an 8-way power driver's seat with adjustable lumbar, dual climate control zones and a 270 watt stereo system with 6 CD changer, 7 speakers and subwoofer. Come see the 2008 Honda CRV!

Posted by Honda Cars of Rock Hill at 9:54 PM

With rates as low as 3.16% APR, there has never been a better time to get into a new Honda Pilot. Loaded with features and 3 rows of seating, the Honda Pilot is a wonderful people mover. Five star safety and amenities galore. Call us for all the details. Interest rate is on approved credit. Come see the awesome 2008 Honda Pilot!
Posted by Honda Cars of Rock Hill at 9:58 PM